Making a Big Impact on a Big Stage”

GOOD LUCK BOYS & WE ARE PROUD OF YOU.. 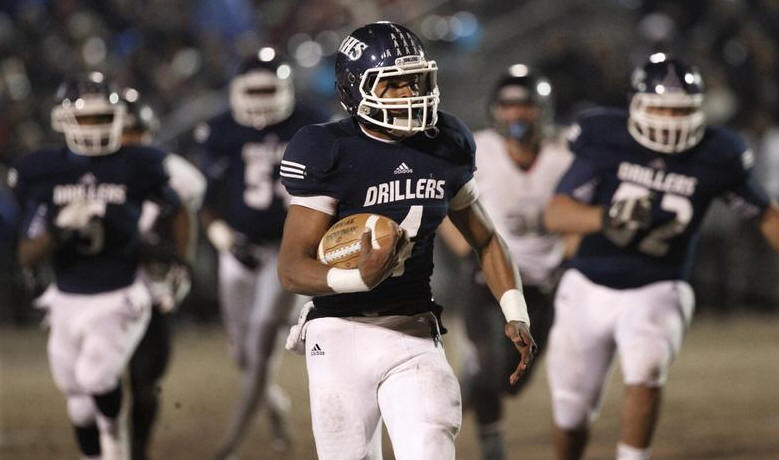 By Felix Adamo/ The Californian

BHS star quarterback Asauni Rufus breaks free for a long gain against Clovis North in the first half.

Drillers leave no doubt in rout

One of the most dominant playoff runs in Central Section history was complete, and Asauni Rufus was trying to survey his dominion.

But his grandmother wanted an autograph on her shirt, first.

“Hold on, grandma,” Rufus said, and then he turned and said what everyone from Bakersfield High was thinking Friday night after the Drillers pounded Clovis North 60-21 for the Central Section Division I championship on Griffith Field.

“All this really means is that the kings are back on the throne,” Rufus proclaimed. “We finally got our shot to get back here, and we took advantage of it.”

Bakersfield (11-2) won its 36th section title, extending its state record, and did it easily. On their first three possessions, the Drillers went 58 yards in five plays, 80 yards in five plays and 50 yards in three plays. All of those drives ended in touchdowns, and BHS led 20-0 before the first quarter expired.

“We started off hot,” Bakersfield coach Paul Golla said. “We didn’t really have to do any adjustments. Asauni did a wonderful job and our offensive line and running backs did a great job of blocking.”

Rufus, who’s verbally committed to Nevada as a defensive back, flashed his tremendous quarterbacking skills on Griffith Field one last time. He completed 8 of 9 passes for 162 yards and two touchdowns, and he ran 13 times for 166 yards and three more scores.

“It was easy on my part, really,” Rufus said. “You could say, oh yeah, look at all those yards, but I was just running through open holes. Honestly, my job couldn’t be any easier, thanks to this team.”

Derrick Vickers’ 33-yard touchdown run in the second quarter made the score 34-0 before Clovis North (11-3) finally got on the board with an Austin Autry-to-Robert McIlhatton touchdown pass. But Bakersfield answered again, on Rufus’ 19-yard touchdown run, to lead 41-7 at halftime.

Clovis North scored twice more in the third quarter, moving the ball behind big junior running back Bolu Olorunfunmi, a 210-pound bruiser who finished with 248 yards and two touchdowns on 21 carries.

But the Broncos, who won last year’s Division I title and the Division II title the year before that, had fallen way too far behind for Olorunfunmi’s brilliant night to matter.

“This was a first for us,” said Clovis North coach Cory Hall, a South High graduate. “We’ll have to go back to the drawing board and make sure this doesn’t happen again.

For Bakersfield, Vickers finished with three touchdowns, two rushing and one receiving, and Jeremiah Reddick scored twice, including a 4-yarder in the fourth quarter that set an automatic running clock in motion.

That’s significant, because it meant that in three playoff games against teams from the elite Tri-River Athletic Conference, the Drillers forced a merciful running clock in all three of them.

“We had no idea this was going to happen, and we played some great football teams,” Golla said. “It says a lot about our kids and our preperation.”

As a section champion, Bakersfield is eligible for a CIF Southern California regional bowl game. For all of its illustrious history, Bakersfield hasn’t played in a bowl game since the system started in 2005. Assuming the Southern Section’s top two champions (Corona-Centennial and the winner of tonight’s game between Bellflower-St. John Bosco and Santa Ana-Mater Dei) go to the Open Division bowl game, Bakersfield would be one of four teams eligible for two spots in the Division I game. The others are San Diego Section champions San Marcos-Mission Hills and San Diego-Cathedral Catholic and Los Angeles City Section champion L.A.-Crenshaw.

“I would love to represent the Central Valley in a bowl game,” Golla said. “…We’ve had a lot of great teams, but we’ve never seen a team do this in the playoffs, that’s for sure. You fall in love with all of your teams, so it’s not fair to compare, but I don’t know how many times this has ever been done in our section.”

It was Golla’s fourth section championship in nine seasons at Bakersfield. The last two, a 35-3 victory over Fresno-Bullard in 2011 and this one, were dominant.

“He’s a great coach,” Vickers said. “He knows what he’s talking about, he stays up late going over film every weekend so we know what we’re doing. He’s great.”

It was also the second section title in three years for this year’s BHS seniors, who called themselves the YGs — for Young Guns — when seven of them started for the 2011 team. Rufus said the seven have taken to calling themselves the OGs — Old Guns — this time around.

“I think our class, we definitely sparked this school,” Rufus said. “This school has had legends come through here, and they’re the head of the school, but I think we made our footprint.”

That mark, the 36th footprint in school history, was one of the deepest left on Griffith Field.

“It means everything, knowing that all the hard work that nobody saw us doing int he offseason, it paid off,” Rufus said. “Now I finally understand what it means to reach the pinnacle of success.” 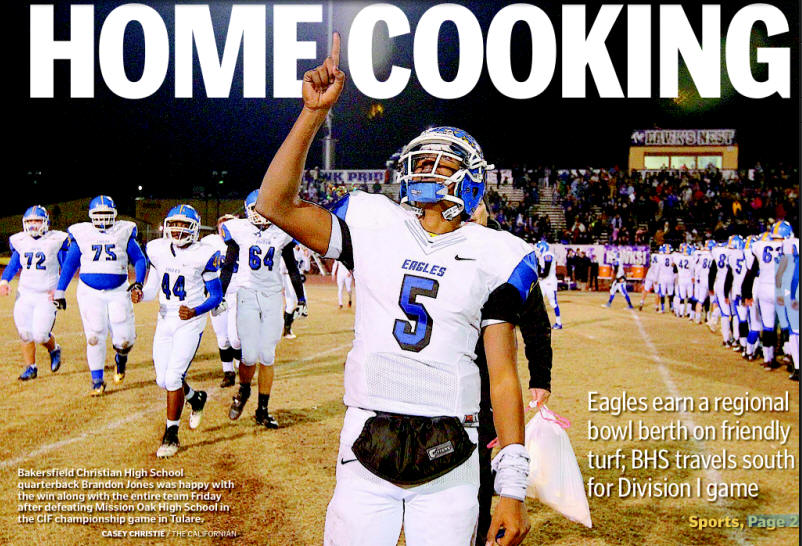 By Casey Christie / The Californian 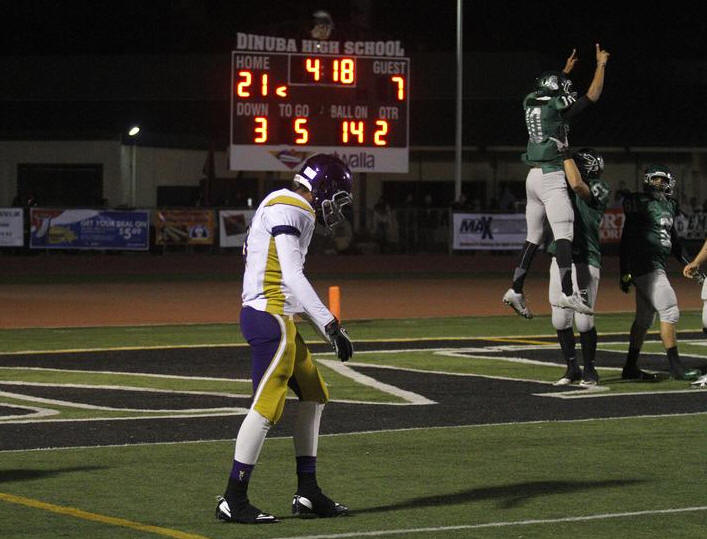 BY STEPHEN LYNCH Special to the Californian

TULARE — They were down, but never out.

But playing with a fierce determination, the Eagles took the blows and kept on battling.

That never-say-die mentality ultimately paid off, as No. 3 BCHS rallied from an early 20-0 deficit to claim a thrilling 35-34 victory over the Hawks at Bob Mathias Stadium.

“When you start working out at the end of January, it’s hard to give up,” BCHS coach Jerald Pierucci said. “It’s just a testament to our kids that they’ve bought-in so much. They never ever stopped believing.”

Matt Smith scored on a fourth-and-goal, one-yard run with 3:07 remaining in the game and then the Eagles defense shut down Mission Oak’s high-powered offense to clinch the victory.

“We all wanted this this game so much,” Smith said. “We had a big chip on our shoulder from last year, losing to Wasco (in the championship game). … After falling behind 20-0, we didn’t give up. We didn’t say ‘oh that’s the end.’ We rallied-up and we got the win.”

The Eagles title chances didn’t appear likely much for much of the game as they trailed until Smith finally put them over the top with his third TD run.

Leading 34-28 and the clock winding down, Mission Oak was 52 yards away from all but sealing its first-ever section championship in any sport, when BCHS senior linebacker Grant Bauma intercepted a pass by Hawks quarterback Trey McJunkin and ran it back 32 yards.

“I saw the guy behind me and I just went underneath it,” Bauma said of his interception. “I just tried not to drop it and ran for my life.”

Smith finished with 117 yards rushing, putting the junior over 5,000 yards from scrimmage for his high school career.

“If there’s any doubt who the best back in the valley is, I don’t know what to say,” Pierucci said. “Because Smith just put this whole offense on his back, a long with the offensive line and carried us.”

Elijah Porchia had 245 yards and three touchdowns on 32 carries for Mission Oak, which was held to just seven points in the second half.

Jones, who came into the game with a BCHS single-season record of 47 touchdown passes, completed 15-of-29 throws for 182 yards and a pair of scores.

He also had three interceptions but was able to guide BCHS to five touchdowns against a defense that hadn’t allowed more than 21 points in a game all season.

“I didn’t play a great game myself but my offense backed me up,” Jones said. “Our defense gave up a couple of scores quick. That’s just our season. We come back and we’re stronger than ever. I just love my team.”

The win, Bakersfield Christian’s 11th in a row after starting the season 0-2, puts it in good position to be selected for a Division IV state playoff berth.

Mission Oak, the only undefeated team in the section coming into the game, led 27-14 after a wild first half.

The Hawks jump out to a quick 20-0 lead, scoring touchdowns on their first three possessions while holding BCHS without a first down until midway through the first quarter.

Porchia did most of the early damage for Mission Oak, ripping off first-quarter touchdown runs of 51 and 73 yards.

BCHS recovered from its slow start to cut the Mission Oak deficit to 20-14 with 7:07 left in the first half on a spectacular 27 yard touchdown run by Matt Smith.

Smith took a handoff from Jones, ran through a tackler and then did a 360-spin to break free for the score.

But after forcing a Hawks’ three-and-out, Jones floated a high pass over the middle that was intercepted by Trent Reed.

Two plays later Trey McJunkin connected with LeAndre Jefferson for a 49-yard touchdown pass to extend the Hawks advantage to 27-14.

The pass was under thrown but Jefferson was able to come back for the ball, tip it up to himself and then race into the end zone.

By John Harte / Special to The Californian

Amir Knox of Ridgeview is dejected after Dinuba scored a touchdown on a double reverse and pass completion, all but sealing victory for quarterback Marcus McMaryion (10), Arnold Gutierrez (57) and the Emperors during Friday’s Division III section championship at Dinuba.

BY FRANCIS MAYER Special to The Californian

Wright did it all for the Emperors, picking up 95 yards on 21 carries, and 92 yards on two catches. He also threw a touchdown pass to quarterback and Oregon State-bound Marcus McMaryion on a double-reverse in the second quarter.

The offense had a lot of opportunities to score because the defense kept chasing Ridgeview off the field.

Ridgeview quarterback Lawrence White has been fighting a knee injury, and was sacked five times and often under pressure.

“I’m happy with the outcome of our team,” White said. “We came together in the middle of the season after a tough start and decided to pull together.”

“Next year we are going to come out strong. I’m a sophomore and I’ve got two more years to play with freshman Ja’Mar Moya,” he said.

Moya scored on a 29 yard touchdown pass from White, and also on an 8-yard scamper at the end of the third quarter. He finished with 64 yards on nine carries.

“He’s a great player. It’s pretty amazing that a freshman can come up and play like that at the varsity level,” Manning said, “I think JaMar ran the football well, and that was probably our bright spot tonight.”

“We played a great football team tonight,” Manning said. “(The players) are very disappointed and upset, and that’s not necessarily a bad thing because when you put your heart into something and come up short, and you should be disappointed,” Manning said.